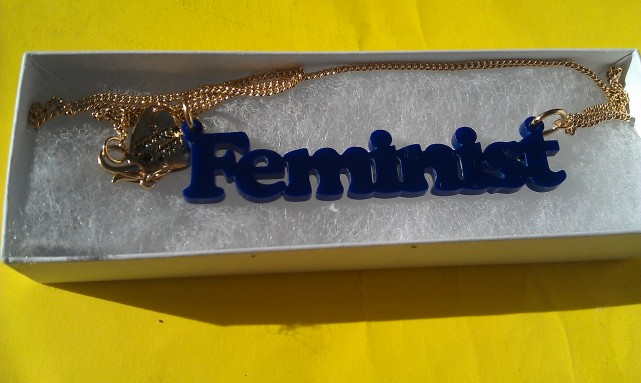 Feminism is the word on everybody's lips. Fifty years after Betty Frieden wrote The Feminine Mystique, Charlotte Raven has announced she is reviving seminal feminist magazine, Spare Rib. In a recent interview with The Guardian, Rosie and Harriet were asked the eternal question, "Would you consider yourself feminists?" Last week, we had a very exciting meeting with campaign group No More Page 3. It all came to a head when our workshop team commented on the sudden flurry of 'Feminist' Name Necklaces orders after our Emerald Street promotion. We headed to Twitter to explore the phenomenon and meet the feminists behind the necklaces. Join us for the first in a new series of blogs, where we talk to Tatty Devine customers about what feminism means to them. Discover why they identify as feminists, what inspired their choice of necklace and their views on the future of feminism. Meet Rhiannon: 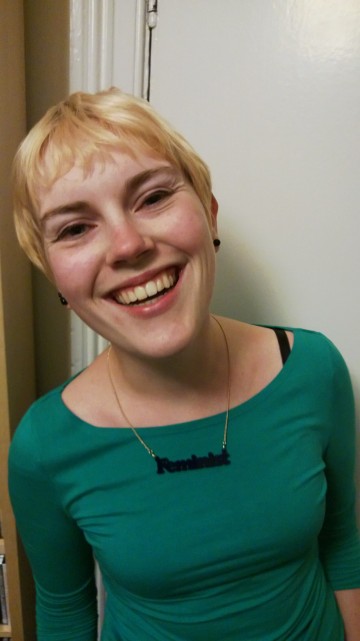 Hi Rhiannon! What inspired you to choose a Feminist Name Necklace? I've had a Name Necklace of my name for about five years and wanted to get another but with a different word on. I thought about it for ages, and in the end "feminist" just seemed like the right word; like my actual name, it's something that identifies me and defines who I am.  Why do you call yourself a feminist? Do you have any feminist heroines? I call myself a feminist because I believe in equality for the sexes, simple as that. My feminist heroes are my godmother Elsie, who taught me about the suffrage movement and everything that led on from it in a way no-one had before; the Suffragettes, beacause without them society as we know it today would probably not exist and Caitlin Moran. Her book 'How to be a Woman' reminded me that being a feminist is just "being polite to people" - and every person, male or female, who has stood up for the cause of feminism over the years.  What do you think is the future of feminism? The future of feminism? The dream situation would be for it to no longer be necessary because those things that feminism strives for have become ingrained into our culture and are done automatically. Realistically, in the nearer future I'd like the term feminism to be reclaimed, and rather than being something which is used either as a negative term or in the sentence "I'm a feminist but..." becomes something people see as a good, positive thing to be associated with, and people say "I'm a feminist" without the need for explaining that it doesn't mean they hate men or want to burn all their bras (although if some feminists want to do that I'm not going to stop them!). Thank you for sharing your story, Rhiannon! Stay tuned for the next blog in our series! Inspired by Rhiannon's Name Necklace? Whether you want yours to say 'Feminist', 'Socialist' or the name of your hero or heroine, design and order it here. We love seeing pictures of you with your new Name Necklaces. Tweet or Facebook them to us, or tag us on Instagram #tattydevine on Instagram.