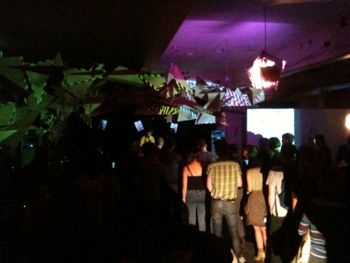 Last night I was on the door for the launch of the new issue of Eel zine. In a warehouse somewhere near London Fields everyone piled in to see what was going on. Dalston Oxfam came down and set up shop in the corner. A friend got a Biba jacket - I was a bit jealous I didn't get there first (one drawback of being on the door). There were bands playing all night, Suburban Mousewife were AMAZING! Apparently it was only their second gig, but you can't go wrong with Delia Sparrow on drums. Actually Women's Hour were there recording, not sure when that will be aired. Before them teenage sister act Typical Girls played, they are the daughters of one of the Suburban Mousewives. They had a really brilliant moody girl sound. I liked the masked band Rex Nemo & the Psychick Self-Defenders, who claim to be a mix of Girls Aloud and Joy Division, they seemed to have a lot to let out. Chris from Position Normal finished off the night, I think it was his second gig playing on his own, as in the past he has played with John (the other half of Position Normal). You can just about make him out in a yellow sweatshirt in the picture. He's great and you can listen to an audio piece about him here. After the bands there was much dancing and gaiety, Zine Queen Savage Messiah's dancing was good to watch although there was a lot of tough competition. Can't wait for the next one. P.S. If you want a copy of the new issue of The EEL, we should have some in the Brick Lane shop soon!