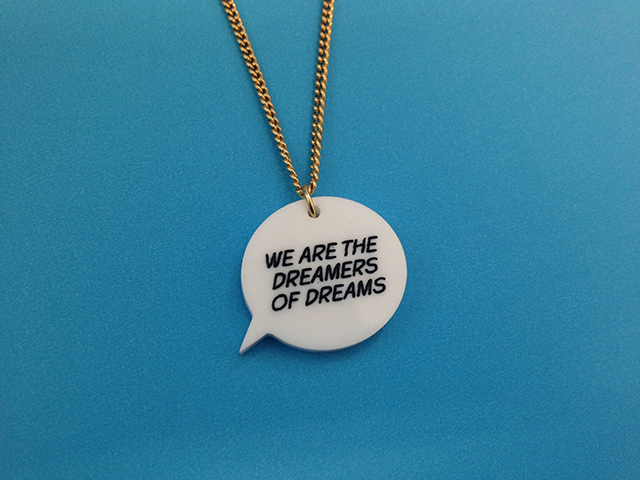 For the latest in our Women With Something To Say series, we'd like to introduce upcoming independent filmmaker Destiny Ekaragha. A rising talent, Destiny is forging her way at an incredible pace - and the film world is sitting up and taking note! We asked Destiny to design her very own Speech Bubble Necklace and her chosen quote, a line from a classic Arthur O'Shaughnessy poem, seems prophetic for her future... Destiny burst onto the film making scene with her first short film, TIGHT JEANS, which she both wrote and directed. Inspired by a walk down Deptford High Street, where Destiny and her brother spotted a man in rather tight trousers, the following conversation formed the basis of an extremely funny exploration of race and culture. TIGHT JEANS definitely struck a nerve, as it went on to be officially selected by the 2008 Times BFI 52nd Film Festival and was voted Best Short Film at the LFF by the Observer. Phew! Destiny hasn't been resting on her laurels, though, oh no! Earlier this year, she released her first feature length debut, Gone Too Far!, an adaptation of Bola Agbaje's Olivier award-winning play. A comedy-drama exploring adolescent romance and culture clashes on a Peckham council estate, it had its world premiere at the 57th BFI London Film Festival. Keep up with Destiny and her upcoming projects here. We can't wait to see what she'll come up with next...!