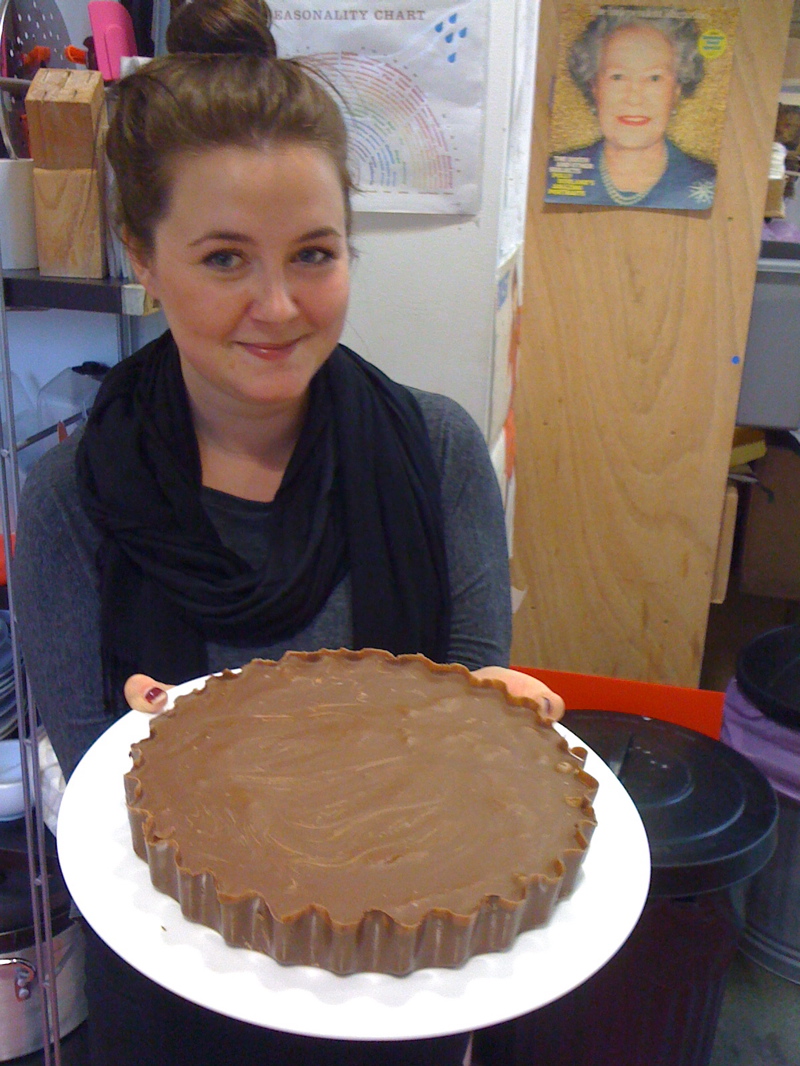 Meet Jenny. And her giant Reese's Pieces cake. There are two jars of peanut butter in this bad boy, which she made to mark her final day at Tatty Devine. Before we give you the recipe, let us tell you a bit about Jenny, because she's really rather marvellous. She interned with us last year, helping to make jewellery and pack online orders. She then moved on to internships at Philip Treacy and Holly Fulton, where she's been working very hard and being generally brilliant. To help us through a busy production time, we took Jenny on for one day each week this spring, so if you've bought jewellery this year, the chances are Jenny has helped to make it. She's now all set to return to Loughborough for the final year of her Multimedia Textiles degree. It was funny when Jenny brought her cake in, because Becki, our production manager, had also brought in homemade mini Reese's Pieces cakes! The method for making them is the same whatever size you go for. It's super simple. Ingredients Chocolate Peanut Butter (crunchy is good) Frilly tart dish for a large cake, or paper cupcake cases and a bun tray for mini cakes Method If you're using a frilly tart dish, grease it lightly with butter. If you're using cupcake cases, pop them into the bun tray. Melt half the chocolate in a bowl over a pan of boiled water. Pour it into the dish or cupcake cases to make a thick bottom layer of chocolate. Put it in the fridge to set. Take it out and smooth a thick layer of peanut butter over the set chocolate, leaving a small gap all around the edge. Put it in the fridge. Melt the rest of the chocolate. Pour it over the peanut butter so it fills in the edges and forms a thick layer on top. Put it in the fridge one final time. Take it out, pose in front of a picture of the Queen and share with your workmates. Thank you Jenny - for the cake and for helping us so much this year. Let us know if you make your own Reese's cake. (You might need us to come and help you eat it. We're good at that.)