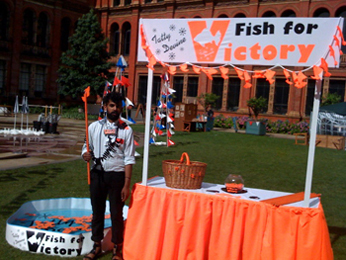 The Victoria & Albert Museum's Village Fete is always an event to get excited about! Every year the garden inside the V&A gets turned into a massive fete, and everyone sets up stall with a game. This year we were fishing for victory! It was a little like the classic fairground 'hook-a-duck' game, but with goldfish! We spent weeks before the event sewing and making lots of orange things. Our intern Hattie made everybody goldfish orange aprons with ribbon around them, Kirsty made fishing rods and spraypainted them orange outside her bedroom window, we even had a special Tatty Devine paddling pool and fish bunting! On Friday afternoon we went to the V&A to set up. We were nearly done when we heard a massive rumble of thunder and suddenly there was rain pouring down. We quickly covered the table with a big plastic sheet and couldn't think of anywhere else to go apart from under the table! We spent the next ten minutes laughing like children under the table, by which time the rain had stopped and the sky was clear. We put the finishing touches to the stall and headed out for afternoon tea and cupcakes! The rest of the weekend was a bit of a blur! The time flew by, and there was never a second when there wasn't someone fishing and someone else winning! We had specially made goldfish rings for the event, over two hundred lucky dip gifts and top prizes of Tatty Devine gift vouchers. We had so many winners! As the sun set over the V&A, it became really beautiful, just a wash of bunting, music, food, people, and the best summer fun! 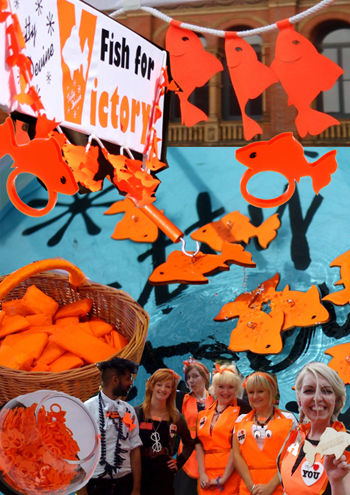