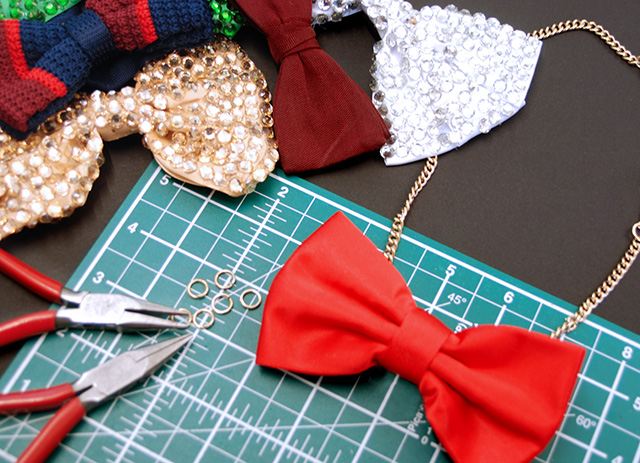 "It's a kind of magic" Vintage shops are full of beautiful dresses, but they are also full of odd little things that you might like the look of, but aren’t sure exactly how to go about wearing: nylons that won’t stretch to fit an actual leg into, but come in pretty packets, and lovely old-fashioned bow ties that are designed to clip to the sort of old-fashioned dress shirts that aren’t made any more. Harriet’s Granddad was a magician: he swallowed razor blades, and then pulled them out of his mouth on a length of string. He always wore a bow tie. You too can add a dash of magic to your outfit with this Bow Tie Necklace. It’s as easy as hey presto… but without the danger of slicing your tongue in half. You'll need: A vintage (or charity shop) bow tie preferably with the metal bit on the back - we bought ours from Beyond Retro. A short 40cm chain necklace Wire cutters 2 small jump rings 2 pairs of flat-nose pliers Optional extras: 1 regular jump ring 2 Beads, one big, one small 1 head pin 1 eye pin 2 pairs of round-nose pliers Make up your necklace using the method shown here. Hold the necklace by the clasp and cut it in half with the wire cutters, opposite the clasp. Attach a small jump ring to each side of the cut ends of the necklace, using the flat-nose pliers. Attach the chain to the holes in the back of the bow tie clasp. The jump rings go through the bow tie holes, and the pliers neatly close the jump rings. (If your chain is finer, attach tiny jump rings to each end of the chain, and then attach the small jump rings). 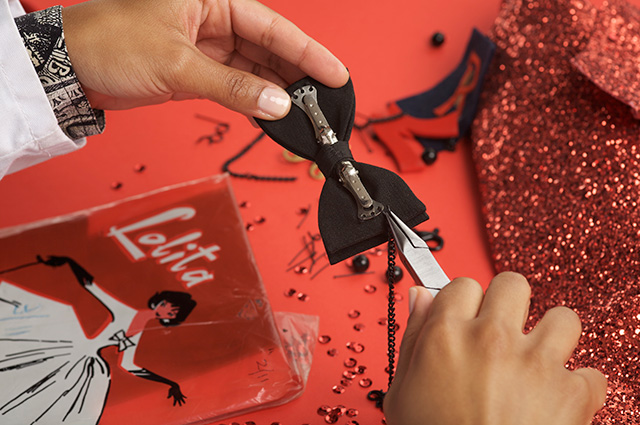 If you’re feeling fancy, you can make it adjustable. With the addition of a regular jump ring your bow tie necklace can go from skimming your chest, to nestling at the collar of your shirt. At the non-clasp end of the necklace, 70mm in, pop in a jump ring, using the wire cutters and pliers technique (see here). You can also add a couple of beads for a decorative flourish, as befits a magician. On the bigger bead thread on an eye pin. Trim the wire, with the wire cutters, so that there’s about 10 mm sticking out. Then bend the wire down at a right angle with the pliers. The next bit is a little fiddly, but you’ll soon get going with a bit of practice. With the round-nose pliers roll the wire up into a loop, with tiny twists, rolling away from you. Try to get it to roughly the same size as the loop at the other end. Then, holding each loop with the flat-nose pliers, check that both loops are facing in the same direction. Tweak gently if they aren’t. On the smaller bead, thread on the head pin. Trim the wire and do the loop thing again. Join the beads together through the loops; the small bead is the full stop. Then you can attach them to the non-clasp end of the necklace. Top TATTY Tip If the bow tie doesn't have the appropriate hardware on the back, sew two small jump rings to the top corners of the bow tie. Make sure you've flipped the bow tie over, so you’re working on the back. If you sew them about 10mm in from the top and side edges, they’ll be invisible from the front. Magic. 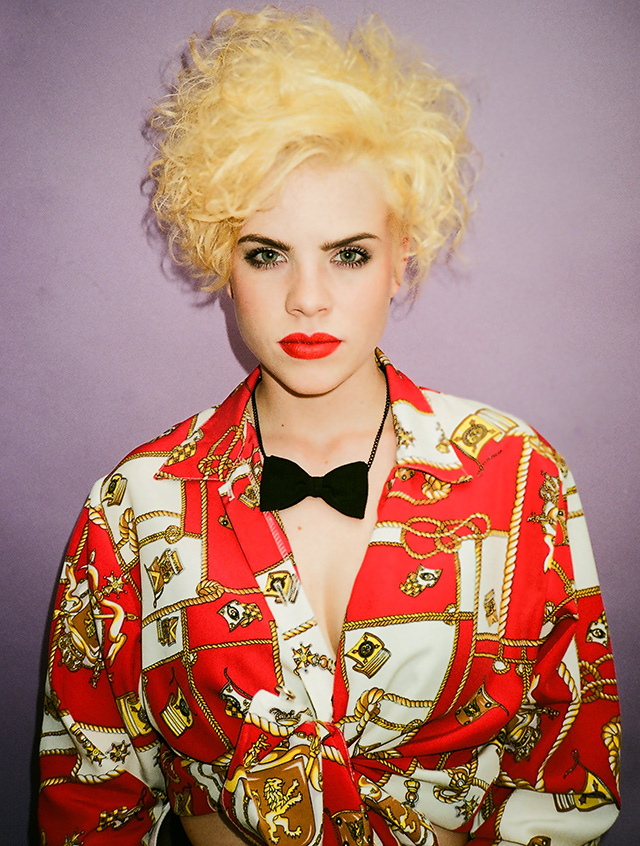